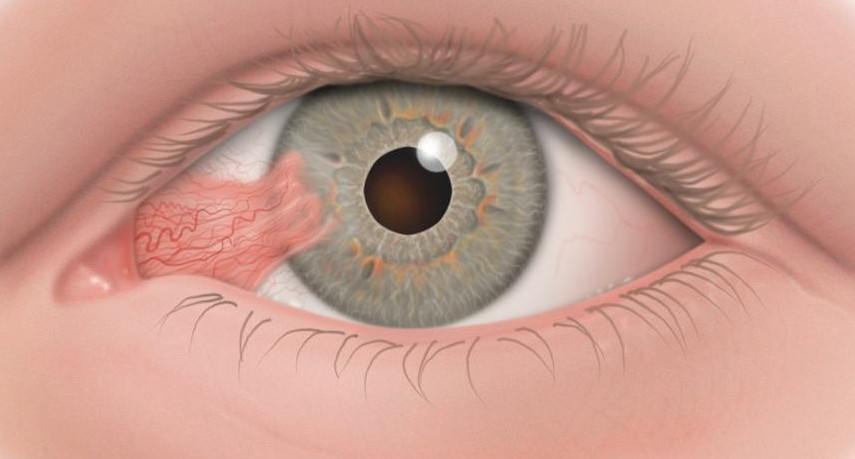 A pterygium is a triangular growth of abnormal conjunctival tissue that invades the cornea.

Its development is not related to injury or inflammation. 90% of pterygia are located nasally, the nose side of the eye. Both eyes are frequently involved but often only one.

The pterygium can advance to involve the visual axis causing marked loss of visual acuity.

The pterygium can be distinguished from a pingueculum, which is a small-elevated yellowish mass, which can become inflamed. The pterygium grows in the interpalpebral fissure (that is the exposed part of the eye) as an elevated fleshy mass of the conjunctiva.

Burning, irritation, tearing and a foreign body sensation may accompany the growth of a pterygium onto a cornea. Astigmatism may be induced and may lead to decreased vision. As the apex of the pterygium approaches the visual axis, glare and reduced contrast sensitivity appear.

For poorly understood reasons the pterygium growth may stop at any stage. It may remain so for the rest of the patient’s life or at a later date again start growing.

There is a worldwide distribution of pterygium but it is more common in warm, dry climates. Studies have shown a strong relationship between ultraviolet radiation and the formation of pterygia.

A study in Australia identified a number of risk factors:

Local drying of the conjunctiva and tearfilm abnormalities may also be contributing factors.

The highest incidents occur between the ages of 20-49 and rarely occur under the age of 15.

The decision to remove a pterygium is dependent on the patient’s symptoms, complications caused by the pterygium and the interest in cosmetic improvement. Recurrences may be more frequent in young adults. Virtually all post-operative recurrences occur within the first year after surgery and often within 6-8 weeks. With recurrence there is a higher incidence of growth into the visual axis.

Eye drops such as preservative free lubricants, vasoconstrictors and mild corticosteroids can relive the symptoms. Some believe ultraviolet-blocking spectacles can prevent progression.

The pterygium is removed surgically and the method depends on the surgeon doing the operation.

A number of therapies are used to decrease the risk of recurrence after surgical removal of the pterygium. The treatment used again depends on the surgeon’s preference. Each has attractive features, but none is without drawbacks.

The following may be used:

The first report of a surgical treatment of a pterygium is more than 3000 years old. The management of pterygia and recurrent pterygia is improving yet many questions remain unanswered. Future studies may elucidate the cause of the pterygium as well as the cause of complications related to the adjunctive therapy after pterygium surgery and prevent recurrence.

JHB Eye Hospital in the media

We use cookies on our website to give you the most relevant experience by remembering your preferences and repeat visits. By clicking “Accept All”, you consent to the use of ALL the cookies. However, you may visit "Cookie Settings" to provide a controlled consent.
Cookie SettingsAccept All
Manage consent